Still Popular Decades Later: The Evolution of Magazines at the Library 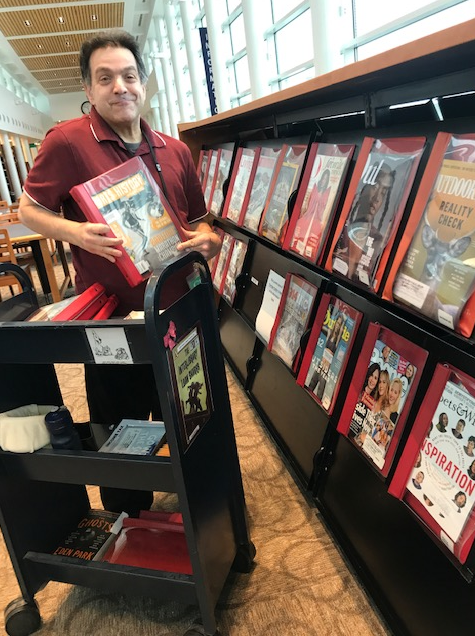 After lunch on my first day of work on July 21, 1986, my supervisor instructed me to go over to the periodical collection to learn how to process and organize periodicals. I have always enjoyed flipping through the pages of the newspapers and magazines at home, so I figured it was going to be fun to work with the large selection of newspapers and magazines that the Greenburgh Public Library subscribed to at the time. Who knew that three decades later I would still be working in periodicals and enjoying every minute of it.

When I walked over to the periodical collection I noticed a small desktop metal file cabinet sitting on a desk that was used to check in the magazines and newspapers daily, when they arrived in the mail.  At the time, and for the next 20 years, the adult periodical collection was located in the southwest corner of the Greenburgh Public Library. After learning the procedures for “processing” periodicals I learned that I would have to do it alone the next day because Tammy (who was in charge of processing periodicals) would be unavailable the next day. Tammy taught me well because I survived my solo flight.

With well over two hundred titles in our collection at the time, my first thought was how do we order and keep track of all these magazines and newspapers? The bulk of the library's periodical collection is managed by a magazine subscription service which does the ordering, paying and renewal of periodicals when a subscription is nearing its expiration date. Those magazines and newspapers which are not available through a subscription service are ordered directly from the publisher.

At the time, a great majority of the periodicals could be checked out for up to a week, as is the case today. Other titles such as Time Magazine and National Geographic were designated as reference and could not be checked out. These reference titles were kept in storage boxes along a long hallway downstairs in the staff only area of the library. Most of the reference magazines, such as Time Magazine, were kept for 5 years. Reference magazines were kept for research purposes. The Library even had issues of National Geographic that predated the War, (that’s World War 1) in storage that were simply collecting dust and bookworms!  Sadly, for this reason, the archived issues of the The National Geographic had to be tossed.

One of the most tedious tasks we had to do each summer was to send some of the reference titles to be bound into a book. We would flip through each page of each issue of each magazine, to make sure the magazine was intact and then boxed them up to be sent on their way to be bound. After a few years, I started saving some of the duplicate issues we received in our magazine “swap box” from patrons. This saved the library (and me) a lot of time in the process.

When a patron wanted a back issue of reference magazine, the reference librarian would ring a bell at the reference desk and a page would retrieve the issue for the patron.  We even had some reference titles on microfilm.

A lot has changed in the time I have worked at the Greenburgh Public Library. In the periodical department, these changes have been reflected in the changes in library technology and services. Today’s physical collection of periodicals is approximately 120 titles which includes children, teen, and adult titles and has been slowly dwindling. Old stalwarts of any public library periodical collection such as Newsweek, Ebony, and most recently Redbook (for example) have either ceased publication or gone strictly to online publication. Other popular titles such as Entertainment Weekly and Rolling Stone have cut back on the number of issues per year.

Budget constraints and technological advances have forced libraries to change. Although the Greenburgh Public Library’s offering of about 120 different titles in “hard copy” form are designed to educate, engage and entertain our patrons we also offer a number of titles online. Through Flipster patrons can access digital editions of popular magazines: The Atlantic, ARTnews, Consumer Reports, Cooking Light, Cosmopolitan, Forbes, The New Yorker, People, Wired, and Vanity Fair. Note: A Greenburgh Public Library card is required to access Flipster remotely at any time. And for those of you who want to look for newspapers from across the country and across the pond, check out Press Reader. Note: Have your library card handy to login. Press Reader delivers an endless stream of top news stories to read, discuss and share. Get full issues of thousands of top newspapers and magazines just as they appear in print.

In the 11 years since the Library’s renovation was completed in December 2008, the adult periodical department was relocated to the adult reading area (aka: the swoop) located on the second floor. I often pause to think of all the changes that have occurred in library services. I still see many patrons coming into the library to relax and read up on the latest trends of the day, and in the decades since I started here, it comforts me to know some things do not have to change...

Travel Restrictions During COVID-19
Where Are the New Movies?
Behind the Mask-Making
Resources for New Immigrants on COVID-19
Healing and Justice in this Tapestry Called Life