Searching for Your Ancestor: Castle Garden and Ellis Island

Millions of immigrants arrived in New York City in the nineteenth century searching for the American dream.  If you're searching for your ancestor who came to the United States in the late nineteenth or early twentieth century there are two major immigration ports in lower Manhattan for you to review.

If your ancestor came to this country in 1872 from France you should take a closer look at Castle Garden.  Remember to search for first and last name variations of your ancestor and to possibly allow for years on either side of the suspected date of arrival in this country.

It is estimated that in 2020, more than 100 million Americans can trace their ancestry to this early period of immigration.

In its lifetime, Castle Garden has been designated a fort, theater, opera house, national immigrant receiving station, and aquarium throughout its extensive and varied history.

Genealogists can search for their ancestor's information for free on the website, developed and funded by The Battery Conservancy.  The website makes available eleven million records of immigrants who arrived at the Port of New York from 1820 - 1892.

Castle Clinton began its fascinating life as a fort built to defend New York Harbor from the British during the War of 1812. Twelve years after the war it was ceded to New York City by the U.S. Army. The former fort reopened in 1824 as Castle Garden, a public cultural center and theater. New York State made plans to establish a receiving station for immigrants following the passage of the Federal law Passenger Act of 3 March 1855. Castle Garden was chosen for the site and became America's first immigrant receiving center and welcomed more than eight million immigrants before it was closed on April 18, 1890.  The Federal government was determined to take responsibility for receiving and processing all immigrants to the United States. The Castle was closed and the reception center was moved to the U.S. Barge Office which was located on the eastern edge of The Battery waterfront. It was the base of operations until the U.S. Office of Immigration opened the newly built Ellis Island in 1892.

Today, Castle Garden is called Castle Clinton National Monument and usually serves as the ticket center for ferries to Ellis Island and the Statue of Liberty.  Take a look around the next time you're in lower Manhattan and remind yourself how much history surrounds you.  Your ancestor's dream started right there in New York Harbor.

Over the course of 62 years, more than twelve million were to follow through this port of entry. The multitude of reasons why they left their home included war, drought, famine, and religious persecution, and all had hopes for greater opportunity in the United States. S 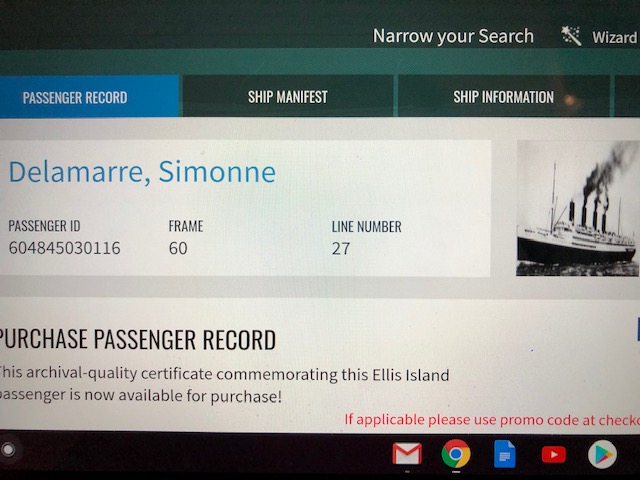 My paternal grandmother studied abroad in France for a year in 1922 before she got married in 1930.  This is Simone's record of travel in the Ellis Island passenger search database.  A valuable free tool for any genealogist.  I can find her name on the ship's manifest and the picture of the boat she traveled on.

Before being designated as the site of the first Federal immigration station by President Benjamin Harrison in 1890, Ellis Island had a varied history. The local Mohegan Indians had called it "Kioshk" or Gull Island; due to its rich and abundant oyster beds and shad runs.

Samuel Ellis became the island's private owner in the 1770s. Ellis Island had developed rom a sandy island that barely rose above the high tide mark, into a hanging site for pirates, an ammunition depot named Fort Gibson, and finally into an immigration station. 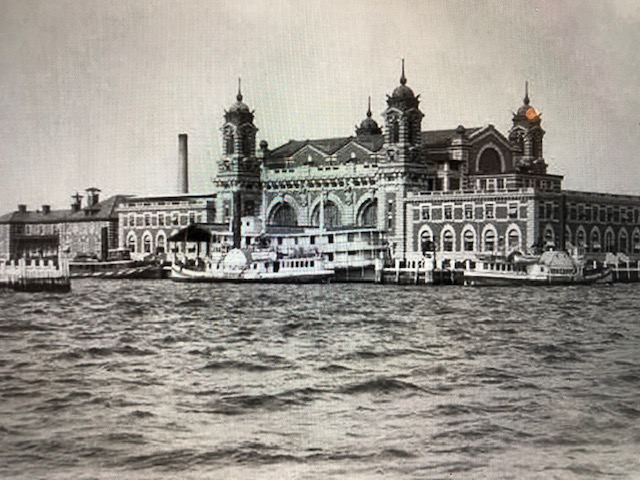 Annie Moore, a teenaged Irish girl, accompanied by her two brothers, entered history and a new country as she was the very first immigrant to be processed at Ellis Island at the first Immigration station on January 1, 1892.  In November of 1954, the last detainee, a Norwegian merchant seaman named Arne Peterssen, was released, and Ellis Island officially closed.

The United States Coast Guard also trained about 60,000 servicemen there. In 1965, President Lyndon Johnson declared Ellis Island part of the Statue of Liberty National Monument.  His presidential proclamation emphasizes how important the area at the southern tip of Manhattan is to our culture and history.  These various structures and sites played pivotal roles in shaping the dreams of many immigrants wanting to start their lives anew in this country.