Searching for Your Ancestors: The 1940 US Census 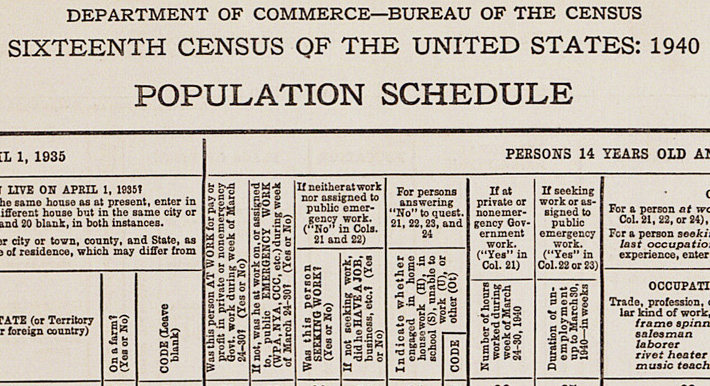 Did you know 87% of Americans today can trace at least one ancestor back to the 1940 Census? Approximately 21.2 million people in the US and Puerto Rico alive today were eligible to be counted eighty years ago.

The 1940 Census results were released to the general public on April 2, 2012.  The Census Bureau allows for 72 years, estimated to be the average human lifespan, to pass before the release of government records. The most effective way to search them is knowing your ancestor's enumeration district. The census records in 2020, are still being indexed by name.

In 1940, census planners divided the country into 147,000 enumeration districts for the 120,000 census works.  These were geographic areas designed to allow a census taker (enumerator) to visit every house in the district within a two-week period.  Census workers were instructed to “visit every house, building, tent, cabin, hut, or other place in which any person might live or stay, to insure that no person is omitted from the enumeration."

The work involved in the 1940 Census incurred the US government a total cost of $67.5 million, 1 billion in today's dollars.  It tallied the population of the country at 131,669,275 for the continental US. This represented an increase of 7.2 percent for the continental U.S. since the 1930 Census. Adding Hawaii, Alaska, Puerto Rico, Guam, the U.S. Virgin Islands, American Samoa, and the Panama Canal Zone brought the population total to 134,176,298. New questions for 1940 included residence five years earlier, income, highest level of school completed and unemployment history. Questions brought on by the Great Depression.

Interesting facts about the 1940 Census:

Before we know it, the 1950 US Census records will be released in April of 2022.  If you have any questions on navigating the US Census, reach out to a librarian via chat or phone.  If interested in knowing more, join me for Searching for Your Ancestors: Getting More from the Census Records, on Thursday, June 18 at 11 a.m.