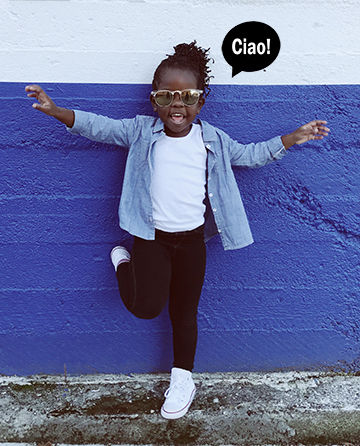 When my husband and I decided to start our family, there were three things that I was going to do as a new mother; use only cloth diapers, introduce piano instruction early and raise bilingual children. I was kidding myself with the cloth diapers. I did manage the early piano lessons but the bilingual instruction went by the wayside. Twenty years later, my daughter still gets on my case about not having started her in a language during her formative years. She excels in English (and math, thanks to her piano lessons and no thanks to her mathematically challenged parents) but has not mastered another language even after 6 years of education.

Years ago it was thought that teaching more than one language at a time would confuse children. It was also not the fashion of early immigrants. When coming to this country, our predecessors felt the need to fit in by making sure their children spoke only English. This was the way of my grandparents when they came through Ellis Island. My father understood Italian but his parents wanted him to speak English, especially in the household, so they could learn as well. By only speaking English, he never learned to master the other language. It would have been wonderful if he was encouraged to practice both. He would have been able to pass that knowledge down through the generations.

Unfortunately my grandparents did not know the benefits of a multilingual household. According to 7 Steps to Raising a Bilingual Child by Naomi Steiner, switching from one language to another builds better vocabulary and grammar and stimulates the learner’s brain functions. Understanding different languages broadens the experience of other cultures and lets the learner embrace other perspectives. It also gives the learner a competitive edge in the workforce. Furthermore, it strengthens social and family connections, especially if there are multigenerational relatives that speak other languages.

Early instruction takes the pressure off the child in later years. Most American schools offer language in middle or high school. This puts American children at a disadvantage when so many other countries offer a second language along with other core subjects, as the child first enters school. Young learners can effortlessly switch between several languages because of that early instruction. Making multi-language instruction a part of early childhood will make it that much easier for children to grasp languages later on in life.

There are several library programs available to help strengthen language learning; Domingos Divertidos for children and Spanish/English Conversation Group for Adults. The library catalog also offers many books in many different languages and Mango, an online learning tool for language instruction.

Travel Restrictions During COVID-19
Where Are the New Movies?
Behind the Mask-Making
Resources for New Immigrants on COVID-19
Healing and Justice in this Tapestry Called Life