Recently, I wrote about our new dog. There's a bit of a learning curve to dog walking, and initially we were all content to walk around town. After all, there was still snow on the ground, and we were very new to this dog thing. By February, I was starting to get bored with the endless loops around the neighborhood. This was a dog bred to hunt, and he was a much happier hound if he walked several miles a day. That’s a lot of laps around the block! 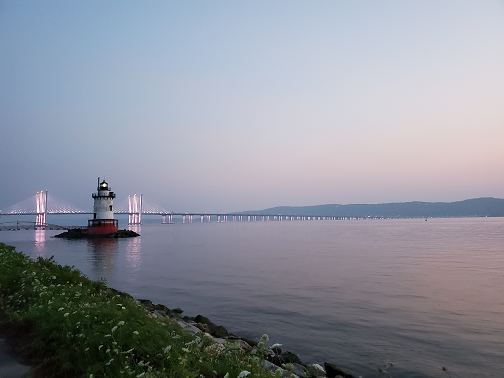 Soon we started to explore nearby, first in  familiar places. Riverwalk in Tarrytown and Sleepy Hollow was a great start: easy access, pavement, and the scenic Hudson River, bordered by the brand new bridge and the historic Tarrytown Lighthouse. There’s a vibrant temporary mural, called the Wishing Wall, painted by community artists, to screen the pedestrian path from the construction at Edge-on-Hudson. Start at Pierson Park, west of the Tarrytown Metro-North station, and follow the path north into Kingsland Point Park. If you go on a Sunday afternoon, you might even catch a tour of the 1883 lighthouse. 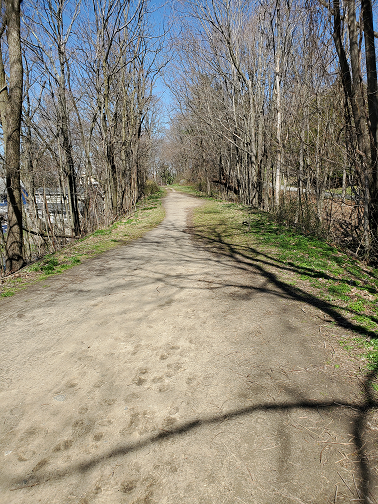 When the snow melted, we started walking on the Old Croton Aqueduct. There are sections that feel remote, like the stretch northeast of the Sleepy Hollow Cemetery. Other sections pass right through town, literally through some backyards. In Irvington, you can catch a glimpse of the Octagon House and other 19th century estates. In Dobbs Ferry, you can visit the Keeper's House and find out more about what's under your feet. The OCA trail is accessible at many points along the western part of the county.

If you’re familiar with either of the routes I’ve mentioned so far, you might notice one thing they have in common: they are flat. In the Hudson River Valley, “flat” is the exception to the rule. I grew up in coastal New Jersey. A small sand dune was the biggest hill I saw, and you’re not allowed to walk on those! While I love my adopted hometown, I’ve never truly adjusted to walking the hills--I’m a walker, not a hiker.

But this dog is extremely persistent. One day he decided that he’d had enough of the aqueduct, and insistently headed up the nearest hill to the Tarrytown Lakes. I wasn’t certain I could manage the hill, but I decided to give it a try. When we crested the hill and arrived at the parking area, I was winded but triumphant. We headed east along the paved path along the larger lower lake, and I was rewarded for my climb. Delicate icicles encased the branches of trees that dip into the edge of the lake. Rocks and grass were coated a glittering crystal sheen from the wind whipping the water along the length of the lake. The dog was rewarded by the deer high-tailing it away from his baying bark. 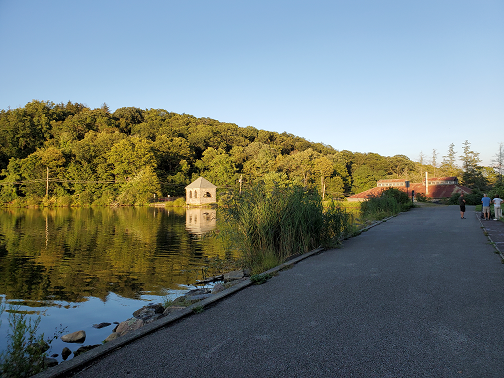 These days I’m more likely to drive to the Lakes, but it’s still a great place for a walk. If you head west from the parking area, you can go to the left on a wide gravel trail, a former railroad bed of the Putnam Division of the New York Central Railroad. (Again, flat. Old railroad beds are great for walking and biking if you’re hill-averse like me.) If you’re feeling adventurous there are several well-marked smaller trails that diverge from the main path. They’re great for dogs or kids, with no real danger of getting lost, as they are sandwiched between the main trail, a residential neighborhood, and the lake itself. The area is a popular local fishing spot, and you may see kayaks on the water of the larger lower lake.

As I said, this dog likes to WALK. The Riverwalk and Lakes paths are only good for a couple of miles. Around here, the best place to clock some serious mileage is Rockefeller State Park Preserve. The official parking area is on Route 117, but there is trail access along Route 448, Sleepy Hollow Road, and Gory Brook Road, and near the parking garage of Phelps Hospital. 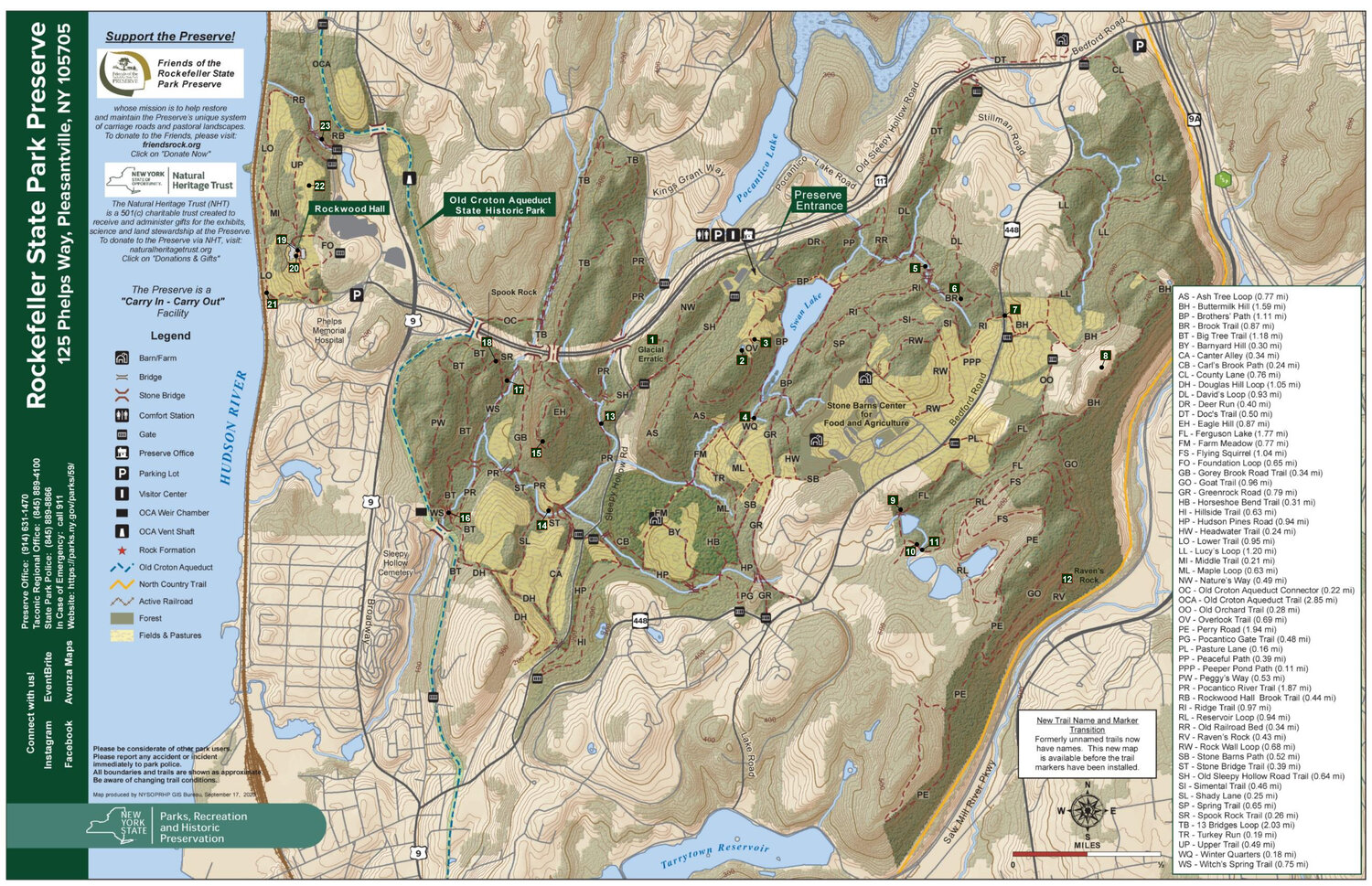 Rockefeller State Park Preserve is the crown jewel of parks in Westchester County. With over 40 miles of carriage roads across more than 1700 acres, the Preserve offers an endless variety of trails. See cows, sheep, and goats grazing the wide fields of Buttermilk Hill and Stone Barns. Follow the shady path along the Pocantico River as it roars after a heavy rain. Visit Spook Rock and Hulda’s Hut along Witch’s Spring Trail for a taste of Hudson Valley lore. See one of the area's largest glacial erratics, dropped during the last Ice Age some 10,000 years ago. Visit the Rockwood Hall section for its famous copper beeches, and spectacular views of the Hudson River. The carriage trails are wide, well-marked and open to walkers, dogs on leash, and equestrians. No bicycles are allowed.

Since I have a terrible sense of direction, I rely heavily on maps. While Google Maps works reasonably well, I highly recommend the free Gaia app. All the trails I’ve mentioned are clearly identified, and indicate distance and elevation. You can track your walks or hikes much more accurately, and easily create routes and save your data. The Gaia app was recently acquired by Outside magazine. There is a subscription version available, but the free version is packed with features more than adequate for the casual hiker.

You can now use you library card to read Outside and 3,500 other magazines on Libby!

There are some books and maps available through the library system, but recently there have been many new trails blazed, so this is a case where there are better resources available online, such as Gaia GPS, TrailLink, and AllTrails. Whichever you you prefer, it's clear that we live in a beautiful place. You can view more photos from my wanderings here, but I recommend that you get out there and see for yourself!